In 1776 a war broke out between the Colonists and the British monarchy over the subjects’ rights to defend themselves.

On the one hand, it was required that local militias be formed of all men to protect the towns and villages.  On the other hand, the Colonists had begun to take issue with the way they were taxed, among other things.  King George III had decided that the Colonists needed a lesson.

A local Governor in Virginia, Lord Dunmore ordered the removal of the gunpowder from the magazine in Williamsburg, Virginia to a Royal Navy ship.  The incident came to known as “The Gunpowder incident” and happened the day after the Concord and Lexington battles.

This action sparked local unrest, and militia companies began mustering throughout the colony. Patrick Henry led a small militia force toward Williamsburg to force return of the gunpowder to the colony’s control. The matter was resolved without conflict when a payment of £330 was made to Henry. Dunmore, fearing for his personal safety, later retreated to a naval vessel, ending royal control of the colony.

On 20 January 2020, the rally brought tens of thousands of armed men and women to the forefront of history.  There was no bloodshed, no fighting, but there was an underlying indictment of the men and women in office in Virginia, from Governor Ralph Northam, to each and every Legislator in the state congress.  Current estimates say no less than 22,000 people showed up.  But, those estimates take into account only the area surrounding the actual Capitol building and not the other people in the streets leading up to the capitol. 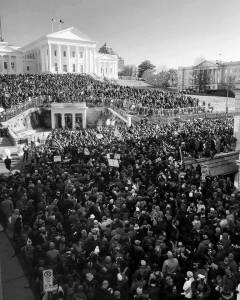 Throughout the day, helicopters hovered, and drones were forbidden, so exact numbers are unknown at this time.

Youtubers videoed much of the activities, and interviewed people through out the morning.

Americans from all over the country came to show that the Second Amendment shall not be infringed.

Reading through the comments in Twitter, Facebook, the Main Stream Media, there are those who state they will continue to go through with the banning of guns.  Others, on the 2A side chide those who went with words of “Nothing happened, you accomplished nothing at all”.

In fact, what happened that day was to affirm our rights.  First Amendment, Second Amendment, were brought to the forefront, and the men and women that made the event happen are the heroes of the day.

Remember, we know that those who lived in America at the time of the Revolutionary War were many, but not everyone was on one side or the other.  Some were on the fence over being Royal Subjects of the Crown.  Others, not so much.

In the end, it is estimated that a mere three percent of the colonies population at the time stood up and fought.  The actual number of participation are actually closer to 6% of the total population, but roughly 3% actually fought.  The rest were support people in some way.

On the 20th, an as-yet undetermined number of people showed up, but estimates have ranged from a low ten thousand to as much as one hundred fifty thousand.

Assuming for a moment, that those folks that showed up represented only the III% of this country who would stand up and fight, there should be closer to 9,904,660 people. 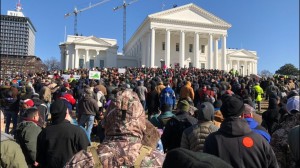 In truth – that is a number larger than the entire US Military, plus all of the Federal “officers” in this country.

And, given we have a population of 330 million, and the fact there are 393 million guns in the population there is a definite disparity here.

In the end, this is why the 20th was important.  To show that those who would wield a law against us, to disarm us, and to usurp our rights will never stand to those of us who support and defend that Constitution.

This author, as  III%er, and an Oath Keep believes his Rights are derived naturally – or from God, as many believe, and NOT from the Government.  We are not subjects of a Monarchy, but rather Free Citizens of the United States first and foremost.

No state, government, governor, or Congress shall infringe on our Bill of Rights and we mean to keep that in place.

Even if they attempt to repeal the Second Amendment, which will precipitate a war.

War is not something the US Government wants with IT’S OWN PEOPLE.

Some in the US Government and some state governments might want to interfere with our rights, but it’s in their best interest to stop meddling, stand down, step back and regain some common sense. 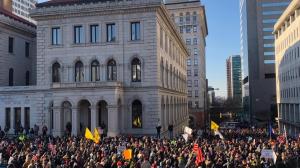 We Patriots ask of everyone else who is not actively involved at this point to take the time to call your OWN state Representatives and tell them to STOP the gun bans.  Stand up and be heard.  Write the Federal Government, Congress, the President and tell them “We will NOT comply” with any gun bans, we will no longer stand down and shut up.  They can’t guilt us into silence.

Those days are done.

2 thoughts on “Right of the People”